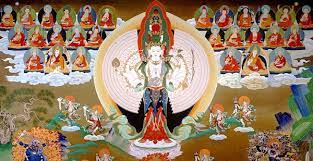 Geshe-la will lead us through a series of three Nyung Nays, beginning with one day of teachings on June 10th. Nyung Nays are profound two-day retreats which involve meditating on bodhicitta, visualizing Chenrezig, reciting prayers, chanting compassion mantras, and performing prostrations. We start early, taking the 24-hour Mahayana Precepts, with the addition of complete fasting (no food or drink) and silence on the second day.

Doing even one Nyung Nay is said to be as effective as three months of other purification practices and is extremely powerful for healing illness, purifying negative karma, and opening the heart to compassion.

Join us for one, two or all three!

10th from 9.30am — Geshe-la teaching and Nyung Na preparation

“It is nothing other than developing and expanding the dedicated heart of bodhicitta…take the practice of thousand-armed Avalokiteshvara (Chenrezig)…the whole reason for having your consciousness manifest as a divine light-being with one thousand arms is so that you can lend a hand to one thousand suffering beings.” ~ Lama Yeshe